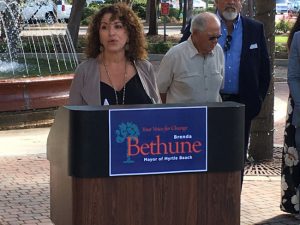 Bethune was born and raised in the Grand Strand and she says though she’s a friend of current Mayor John Rhodes, its time for a change in leadership.

“We need a leader who has the tools to get the job done.  That being said, today, I am extremely honored and humbled to stand before you and announce that I am running to be your voice and your mayor,” Bethune said.